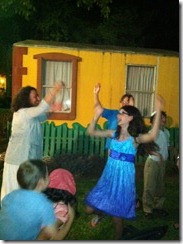 I am sitting on my flight getting near to Philadelphia as I am writing this post. The time since Friday afternoon when I wrote my last post has just flown by all too quickly. The bat mitzvah began with Kabbalat Shabbat as the sun was going down Friday evening. Kabbalat Shabbat is not a service that I have led often but I have spent the past five Fridays at beautiful services and I put my trust in that experience to get me through the service in a moving way. The tunes that I have loved singing along to came to me and Steve made sure that there was dancing when it was appropriate. Despite a lack of siddurim for every person and the fading light made even less when the power went out during the service eliminating even the minimum electric light which we were using. People were singing along, clapping and dancing and I was so thankful for being able to be a vessel to pass along the beautiful davening I have experienced so that those gathered for this event could also welcome Shabbat in a moving way.  We finished with Shalom Aleichem and the blessing of the children.

We then went as a group to the Cheder Ochel – Dining Hall – of the kibbutz where there were other guests already eating dinner. We gathered as a group around the end of our tables for Kiddush. As we all stood singing this prayer that sanctifies Shabbat and marks the beginning of Shabbat dinner, one of our group noticed that some of the other guests, older tourists from Italy, had stood up and were joining in our prayers. This was really moving and reminded me that Jews everywhere say the same prayers. As the kibbutz is not religious, there probably had not been an opportunity for them to say Kiddush and it was so beautiful to have them join us in our recitation of the prayer. Shabbat dinner was delicious – the first of many tasty meals of the weekend.

After dinner many of us sat talking late into the night and it was after midnight when I went into bed. You can imagine then how doubly unhappy I was to be awoken at 4:00 am by an air raid siren. We had not been briefed on what to do if this had happened and, in fact, the one person who had asked about it had been practically scolded for being worried about such things so far out in the middle of nowhere. Steve was also awake and we gathered passports and phones and headed out side. There was no sign of anyone else from our group and since we weren’t sure what to do, I wasn’t sure if we should wake them up. As we were discussing what to do, we felt the impact of the rockets. They were clearly far off, but it was still quite unsettling. We heard voices and walked in that direction. There were a number of Israeli visitors to the kibbutz milling around trying to decide what to do as well. No one knew where the bomb shelter was and there weren’t any kibbutz members around. We finally all decided to just go back to bed since there didn’t seem to be anything else to do. In the morning the rest of the group was surprised/concerned that they hadn’t heard the alarm and I got a fair share of razing for not waking them all up. I explained that there wasn’t really anything to do if they had been up so I hadn’t seen the need to alarm them. When one of the group asked about shelters, the kibbutz member said that they had not used them since 1991 and they weren’t even sure where the keys were. They said that the siren had gone off because they are hooked up to the system in another area and that it didn’t really reflect a threat to us directly. They were, again, amazingly blasé and unconcerned about the whole situation. We were told that if they did determine that there was a threat, there would be a training that afternoon so that we would know what to do. There was no training so I guess there was no threat.

Shabbat afternoon was spent swimming, napping and preparing for the bat mitzvah that evening. It was quite hot so taking it easy and soaking in a cold pool made good sense. Shabbat lunch was served at 2 and then most everyone went for a long nap. Elana, her mother and conferred about the service that evening and her father went off to find a suitable “desert” setting within the safe confines of the kibbutz border fence. Spice bags were made using spices collecting by Elana’s uncle during their trip around Israel the week before and contained Lavender, Rosemary and Myrtle.

At around 7pm we began the bat mitzvah with the Ma’ariv service. Since there were not enough siddurim for everyone I led along with Elana so that I could do the whole of the Amidah out loud for those without a prayer book to hear and respond “amen” so that they got credit for saying it. Elena did a great job leading. Her brother, Jacob, and her father helped lead Aleinu and her cousins came up and sang Adon Olam with Jacob. I introduced the singing of Adon Olam by giving over Rabbi Ed Feinstein’s story of how he imagines this beautiful prayer came to be written. It was written in medieval Spain and we do not know the name of the writer. Rabbi Ed pictures a man laying in a field trying to fall asleep under the stars. The prayer begins with God distant and great – Creator and Eternal – and R. Ed’s medieval Spanish Jew is looking at the stars thinking of God as that far away and awesome. The poem and the poet then move closer and more personal and the prayer ends with God as personal protector and R. Ed’s Jew is able to fall asleep.

At this point Elana gave her d’var and as the light faded away and we were able to count the three stars that we needed to know that Shabbat was over, I gave Elana my charge. Elana spoke beautifully about the separations of the Havdalah service (holy and profane, Jews and other nations, light and dark, the six days of work and Shabbat) and then about the commandment for B’nei Israel to separate themselves from the natives in Canaan as they enter the land which is given in parasha Re’eh.  Afterwards I sent Elana to her parent for blessing and we all sang “Siman tov and mazal tov” and danced. A charge is a speech given to the bar/bat mitzvah by their Rabbi or a teacher. It is meant to reflect upon their learning and accomplishments so far in life and “charge” them with continuing to learn and grow as a Jewish person and a mensch. This was my first charge and it was so lovely to see how important my words were to both Elana and her parents. I have enjoyed our time learning together, and look forward to it continuing and speaking about it was easy to do.

We then gatherer things for Havdalah and headed off to the secret location picked earlier in the day by Joel. It was very dark and lighting up the night with many homemade beeswax candles was a bit of a challenge. Yoel and Jacob made the candles from wax from their own bees and it was very special to use them for this ceremony. There were enough for us all to take one as a souvenir afterwards. This was a beautiful ceremony and after it several people shared additional blessings for Elana. Both her grandmother and brother spoke beautifully about Elana’s kindness and thoughtfulness. Then, using my IPhone as a flashlight, we made our way back towards the kibbutz proper to find the location of the party.

The kibbutz staff had set up a beautiful area outside for dinner, dancing and freilach (fun). There was more great food, wine and beer, music and good friends and family to enjoy this special moment. I have been to big fancy b’nei mitzvah parties and to smaller more intimate parties and this one was definitely one of the most sincere and enjoyable ones. Songs were song about and to Elana, dances and cheers were done and just about everyone got lifted up in a chair. I was lifted up by a group of children  which was quite a thrill – in more than one way!

Seeing and hearing the pride of Elana’s family in her accomplishments and also their satisfaction in the ceremony/Shabbat as a whole made me very happy. This was my first bat mitzvah and I feel that it went well and was a good reflection of Elana and allowed her to show off her strengths and enjoy becoming a Jewish adult in a relaxed and supportive setting. Her family seemed very happy and she was beaming and that was really all I needed!

No air raid sirens Saturday night though there were more rockets fired into Israel and Sunday morning was a bit tense as we all discussed the need to drive north and the safety of that undertaking. Steve and I decided to make a brief stop back in Jerusalem and arranged to leave our luggage at the apartment of a friend’s parents. We headed off and did not, thank God, encounter any difficulty or see any signs of trouble during our trip. We did not go through Be’er Sheva but rather to the east of it. We had a fast paced last two hours in Jerusalem with, of course, a stop at the Mahane Yehuda shuk for more fruit and nuts and lunch at Aroma. I was able to replace one of the shawls that I had bought and then was stolen. We then headed off to Tel Aviv to meet some more cousins of Steve’s. I will do a separate blog for that.

I am glad to be going back to Seattle after all most six weeks away but those last two hours in Jerusalem reminded me of what I was leaving behind. The air and energy of J’lem let me forget the theft just a week ago and the air raid sirens two nights before. I love being in Jerusalem and cannot wait for the next time that I am able to return and live there again for a  good stretch of time. There is no other place in the world like it. Seeing the rest of Israel and, in particular the out of the way places that we drove through on our trip, was amazing and made me feel like I knew the whole country better instead of just one city of it. The Dead Sea and Masada were wondrous, meeting cousin Max was lovely and just what was needed at that moment and, despite being robbed while there, Caesarea was also pretty cool. Finishing my trip with the feeling of accomplishment after seeing the joy and satisfaction in Elana and her parent’s faces was also incredible. I have so enjoyed my time in Israel this summer and am thankful to all who made it possible. I can’t wait to return.