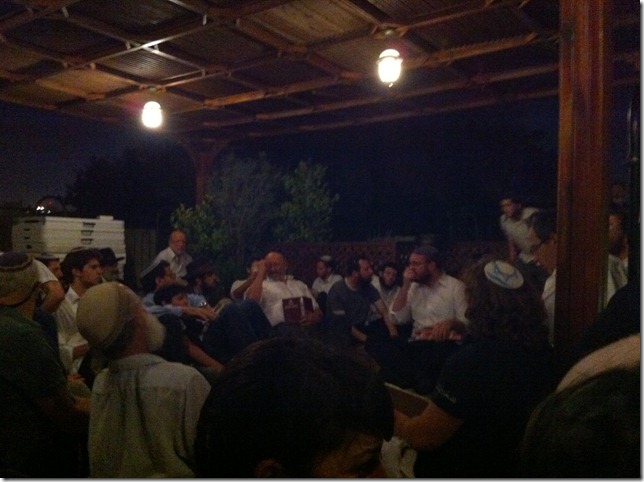 Tisha B’Av, (the 9th of the month of Av) for those who aren’t Jewish, is the ultimate day of mourning in Jewish tradition. It is the day that, traditionally, many bad things have happened to the Jews. It all started with the spies who returned from touring Canaan coming back and saying that there was no way that the Children of Israel could win the land. Since God had promised to help them in this endeavor, their doubt and spreading of fear was unforgiveable. Trust in God had been betrayed and the people are punished by God declaring that they will wander in the desert until all those over 20 are dead – or 40 years. The destruction of the First Temple by the Assyrians and the Second by the Romans also happened on this day and it is this destruction and loss of the central place of Jewish worship and God’s “home” on Earth that is really being mourned on this day. There is still no Third Temple and, even though there is now a Jewish state in Israel, the Jewish people still are distance from God due to it’s absence. I have already shared some of the learning I have done in preparation for this day, but even all that wonderful learning did not prepare me for how meaningful last night and today were.

Yiscah and I had our last meal – a boiled egg dipped in ashes – and proceeded to the Old City. We had learned on Sunday night at the shi’ur with Shlomo Katz that he would be leading services Monday evening at a private home with a terrace overlooking the Temple Mount. We had been unsure of where to go and at this news both looked at each other and knew that this was where we needed to be. Shlomo has been so central to the learning we have been doing and has given over(from R. Shlomo Carlebach) such deep learning about Tisha B’Av, we couldn’t imagine being anywhere else. The house was unbelievably beautiful with stunning views – I will post pictures on Facebook of the views. By the time we started services there were probably 70 people sitting on the ground on the terrace. It was a cool evening with a breeze and all around us were the sounds of other Jews marking Tisha B’Av as well as Muslims marking Ramadan and the celebrating that comes each evening at dark. Their celebrating made an interesting backdrop to our mourning – their party music and fireworks punctuating our songs of mourning and reading of Lamentations.

Shlomo and his father each read part of Eicha (Lamentations) and I have to say, with all respect to those I have previously heard chant Eicha – that this was the most beautiful reading of it I have ever been privileged to hear. Such emotion and deep kavanah (intention) in the reading and such musicality as well. If it wasn’t clear that this was not just a “recitation” already, it became clear when Shlomo stopped mid verse at one point. I couldn’t believe he had lost his place and then I looked at the line that he was reading and knew why he had stopped. Shlomo has two young daughters who he talks about frequently in his teachings and clearly loves more than life. The line was about the daughters of Zion boiling and eating their children during the siege on Jerusalem. He could simply not bear to read the line and when he did continue it was with tears in his eyes and breaking in his voice. This broke my heart as well. After Eicha was finished, Shlomo continued for another hour or more alternating beautiful teaching with niggunim (songs, usually wordless). He really opened his heart and poured it out for those who were blessed to be in attendance. When he was done, the hostess, Pamela Claman, asked if she could share part of a teaching he had apparently given at dinner prior to the fast. She shared about the difference between a prayer and a blessing and that a blessing is more holy because it involves two people (or more). In prayer it is us and God and we are usually asking for something, probably for us. But when you give a blessing – you are giving and you are involving at least one other person. It is this giving and bringing together that makes the blessing so holy. I thought that this was really beautiful, and as someone who signs all her correspondence with “with blessings”, it really spoke to me. On Sunday I had met a friend of Yiscah’s who upon our separating had given each of us, and even my husband who she hadn’t met, a long and beautiful personal blessing. I had found this so moving and was so impressed with how comfortable she was in doing this. I aspire to such ability to share holiness and blessing.

Today I spent most of the day at Pardes where they had a day of learning for Tisha B’Av. This is no easy feat to arrange as Torah learning is actually forbidden on this day as it brings joy. There are a list of things you can learn about – mourning, destruction, loss and such happy topics. I attended a number of great sessions on the laws of mourning and grief in Judaism and their role in helping us to process our grief “appropriately”. I have always thought that the Jewish customs of mourning are a brilliant part of Jewish ritual and, though, thank God, I have not been a mourner myself, find myself grateful for them when comforting mourners and helping them through their loss. The second session was a bit more “touchy feely” and had us think about the destructions in our own lives and then what good or change had come out of them. She referred to this process as “composting”. It was a good exercise as it is always good to remember that good can come out of bad. I personally am forever grateful to a person who caused me great heart break because without them I wouldn’t have the life I have now and this exercise was a good opportunity to remember that . All of the wonderful things I have, my job, my husband, my community, being here in Israel this summer are worth the pain suffered in the creation of who I am today. The afternoon sessions were with Danny Gordis and Natan Sharansky and were both fabulous and memorable. R. Gordis spoke about what has been lost due to the history of the Jewish people and how we aren’t a “real” people because we have had to move around so much and because of the existential threat that we have historically (and continue to) live with. As he said, “It isn’t normal for a People to constantly live with the knowledge that other people want to kill them.” Natan Sharansky spoke beautifully about the power of identity and the centrality of Jerusalem and Israel to his work for human rights and freedom.

It has been a great week on other fronts and I will try to share about them later. I was in the middle of the historical protests here on Saturday, August 6th and also had fun meeting two formerly “virtual” friends in person and spent Shabbat with the family from Seattle whose daughter’s bat mitzvah I will be doing on the 20th. For now it is bed time! My husband arrives tomorrow and I can’t wait for him to be here!! The apartment is cleaned, I have cleared him a shelf or two and a drawer and I can only hope that he actually fits in the bed (I am not sure it is long enough!).

I wish you all the blessings of happiness, health and plenty.